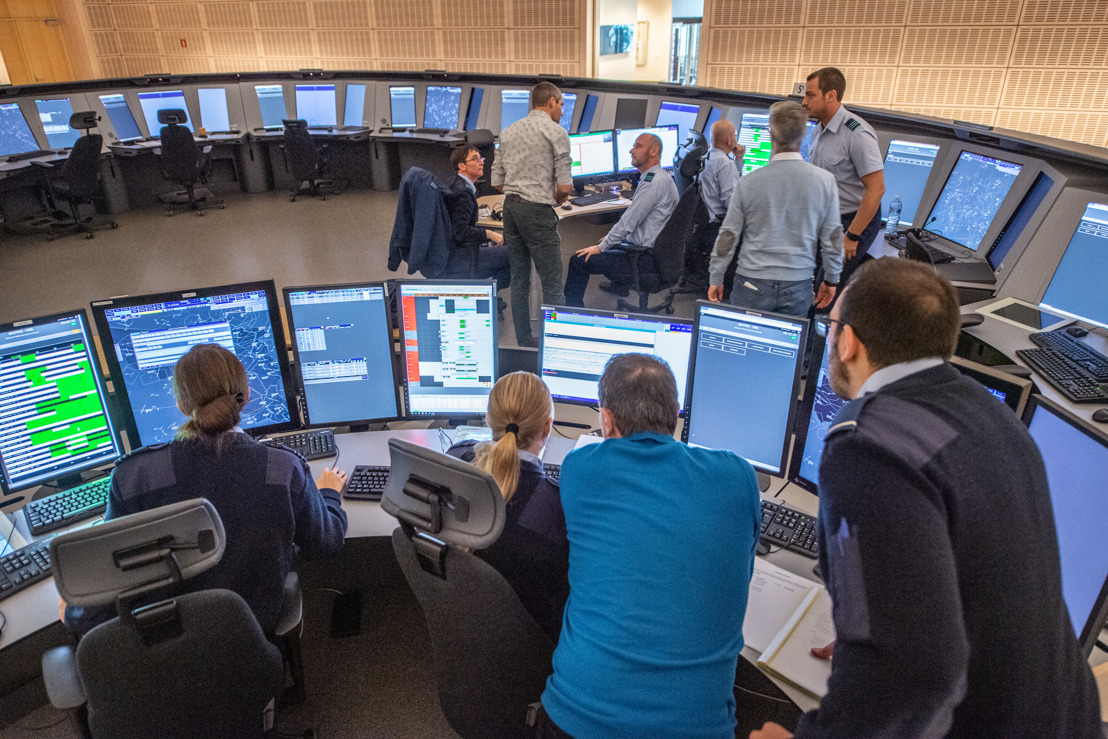 The airspace above Belgium is limited in size and utmost complex because a lot of aircraft are using it. Besides its  commercial – and to a lesser extent recreational – purpose, the airspace also has a strategic importance for military operations and training. In order to guarantee the safety of all air traffic, the military airspace was maximized during those military duties, both in space and in time. Thanks to a closer collaboration between both air traffic control services on the same location they can much better align their operations. As soon as the military airspace is cleared, other aircraft can use it again.

The synergy between skeyes and Defence was included in the government agreement. All users benefit from a more efficient use of the airspace. Because air traffic volumes are on the rise, the airspace has become  a scarce commodity that everyone wants to use as much as possible. skeyes – and Defence – want to meet the growing demand as far as possible, but their major concern always remains to ensure the safety of all air traffic. This collaboration offers additional guarantees in this respect as well. Defence is certain that their pilots can at all times have an airspace reservation for their air operations. Military flight movements are different from civil air traffic in three dimensions. Furthermore, efficiency gains also result in ecological gains: aircraft can fly shorter trajectories and use less fuel as a consequence. The latter is in its turn commercially more advantageous for airline companies. Those are all important assets in an international and competitive environment in which there is not only a battle for airspace, but also for air traffic control services.

Impact in many areas

22 military air traffic controllers from the ATCC will move into the skeyes CANAC2 air traffic control centre in Steenokkerzeel. They will be equipped with a separate working station in the operational room. The move from Semmerzake was preceded by a long and thorough preparation.

Some infrastructural modifications were necessary to accommodate the new colleagues, but the operational system also underwent major changes to align the functioning. Defence uses SAS2 now. That is the same system as Eurocontrol, the third player in our country who manages air traffic at a higher altitude. In the meantime we are working on SAS3, a unified system for both skeyes, Defence and Eurocontrol. It should be finished by 2024.

Of course, the military’s arrival at the skeyes site also has an impact on their own situation and on all of the company’s activities. In order to prepare everyone for that, a roadmap has been developed, allowing the staff of both organisations to get acquainted with each other and with the different corporate cultures and working methods. The relationship and the collaboration between Defence and skeyes have always been excellent and the Belgian Supervisory Authority - Air Navigation Services (BSA-ANS) has also been involved from the beginning.

Johan Decuyper, skeyes CEO: “skeyes and Defence have come a long way together. Our technical, operational and administrative services have gone the extra mile to make sure that we were able to welcome our military colleagues in Steenokkerzeel today. Furthermore, this has all been achieved without any impact on operational air traffic control during the whole process. The fact that we will be able to manage the Belgian airspace even better and more safely together in the future, is an extra advantage in the international race for airspace and air traffic control services.”

General-Major Frederik Vansina: “Civil air traffic above Belgium is growing steadily. Thanks to this synergy we can consolidate the needs of the Airforce now and in the future. Other countries such as the Netherlands, Germany and Denmark have a similar synergy between their military and civil air traffic control. Now we will also be able to benefit from such a collaboration. That puts us in a stronger position in the international context, in which we will want to honour our military commitments. Our missions in the Belgian airspace are crucial for that. For this purpose we can keep performing our missions in optimal circumstances.”